Well we had our first mini harvest this evening. it was just a bit of chive and a leaf of dandlion. As harvests go it was small but it was still significant. The chives could be combined with the eggs that our chickens are now producing with very little effort to make a nice greens omlet and we could serve it up with some garlic wilted dandelion leaves for a March fresh Minnesota grown meal. I know it can be tricky to eat locally some months of the year around here. But combined with the remnants of last falls pickles the march Minnesota garden can in fact feed you quite well.
In gardening notes,
I have extended the chicken garden. By forking over the loose soil and sod and throwing the sod to the chickens along with the dandelion roots I have already doubled the size of the chicken garden. We plan to grow some grains for storage and for feeding to the chickens during the winter. We will also grow chard to feed them during the summer to supplement the grass and grubs they get on their own.
Posted by Frustrated Farmer Rick at 7:35 PM 3 comments:

The sun is ours now!

Well I hate to break it to you southern brethren but the sun is ours now. You have had your dance with our dear sweet sun but now the tune is fading and it is our time. It was a long time since it our days outlasted our nights here in the north but that time is at end for another year. We are pretty far north so even though the days have been lengthening since December it is only now really starting to work it's dependable annual magic.

Earlier this year I started getting a bit antsy and went out into the snow to build the following structure in an attempt to catch a bit more of the sun and possibly get a jump on the season. 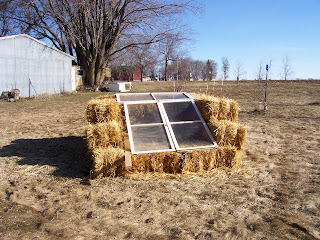 Now to get the full effect you have to imagine me knee deep in the snow and digging out a place to build this ill thought out structure. So what was wrong with it? First off I didn't measure the windows and ended up with a structure that was too wide and let in the winter air. Second I managed to put it in the shadow of the big maple even after trying to account for it. So major fail there.

So plan B involved moving the straw bales and windows to the garden which even now has a small corner of snow in it. 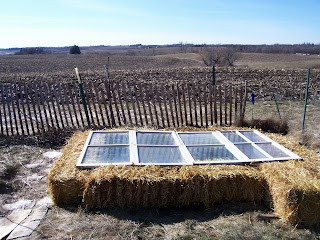 So far that is working out much better the soil is almost hot on a sunny day and I think I should be able to start some plants in it this week. Which is good as my windows in the house are already full.

Also here is the annual first rhubarb picture! It has become a bit of a thing to post this picture each year so there it is. You may rejoice once again. I also managed to fork over a few of the beds I had covered with chicken manure last fall. I am hoping that this helps the soil to warm up a bit quicker. I also hopes it starts the process of the soil making use of the remains of last fall's compost addition. I am thinking of starting seeds of spinach and radishes this week. 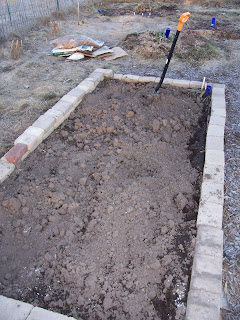 In other news I am nearly finished with the duck house. I just need to add the wheels trim down and mount the door and paint it. I spent quite a few pleasant hours working on it in the pole barn this weekend. I also need to put together the crate that is the new shed soon.
So much to do! So much to do!
Posted by Frustrated Farmer Rick at 6:32 PM 6 comments:

So we have been eating quite well lately. Jess already posted about our lasagna that we made wit hour own tomato sauce, pasta and home made cheeses last week. I really felt it was an accomplishment to grow and make so much with our own food.

Last night we made ravioli with ricotta cheese that Jess made and pasta made from our hens eggs. To be honest Jess did all the hard work and I just helped with the sauce at the end. Last year we made a few small batches of garlic scape and walnut pesto and froze them. I combined them with butter and served them over the ravioli. It was delicious and looked pretty good as well. 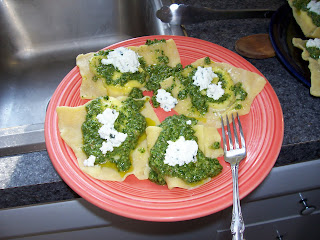 We also made a batch of Lemon Ricotta pancakes made famous by Hell's Kitchen in Minneapolis.
Ours turned out quite well but still are no threat to the originals. You really should stop in and try them if you have the opportunity. We served them up with a few slices of Lorentz bacon and it was wonderful. 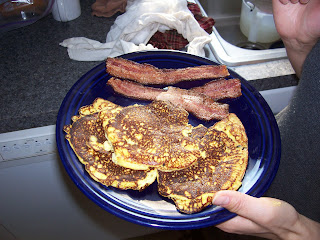 Other than that Spring is in full swing around here. I took down the snow fence and almost all of the snow has melted from the yard. The sun is heating the garden beds and I hope to be planting frost hardy crops by possibly this weekend.
Woot!
Posted by Frustrated Farmer Rick at 7:38 PM 6 comments:

Just a few quick notes.
Spring is starting to show itself. We had our first rain a few days ago and the snow is finally on the retreat. We are supposed to have temps in the 35-40F range for most of the rest of the week.
I have not yet planted the mache that I had hoped to. Perhaps tomorrow will give me time. I also need to start some leeks and maybe the fava beans.
This evening I got the chance to cut down last years hop bines and put them into the burn barrel. I hope to get to the raspberry canes this week as well.
The hens have started to lay us some eggs again. Not that many as the girls are getting a bit long in the beak but still enough to keep us in eggs for now.
I also ordered up a beer kit to make a witbier for summer drinking and a new species of hop rhizome as well. They should arrive this week.

I still have a ton of projects to get going for this season. Luckily we will get an extra hour of after work sunlight this weekend. Woot!
Posted by Frustrated Farmer Rick at 6:47 PM 1 comment:

I have been thinking about other traditions to prepare and preserve foods. A while back Jess and I had a great dinner at a Korean restaurant on the way home from work and the meal was served with a selection of lightly pickled vegetables. This led me to begin thinking about Asian influenced pickles in general and I remembered being served some umboshi once in the service. Umboshi are Japanese pickled plums and since we had so many plums this year the idea of pickling them sounded great. Well a bit more research later I learned that those are not the same types of plums but it also led me to the entire class of Japanese preserved vegetables called Tsukemono. One of the first things I found was a tsukemono press that is used to help brine and draw out water from vegetables like a weighted lid is used when making sourkraut. Since this seemed like an elegant way to make quick tasty salt preserved produce during the growing season and also make the occasional batch of sourkraut with, I ordered a press of Amazon. I know this is not terribly frugal but to be honest that has always been the biggest part of this life for me.

So to test drive the press we picked up some turnips and a bit of dried seaweed known as kombu. I first peeled and cut the turnips and quick rinsed the kombu and cut it into strips. I then added them to the press with around a tablespoon of pacific sea salt and closed the press and cranked down the plunger. I let them sit overnight in the press in the refrigerator. Sure enough there was liquid by morning. 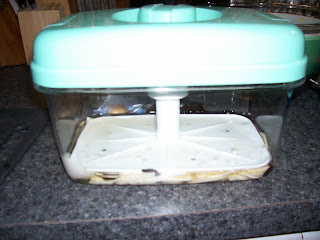 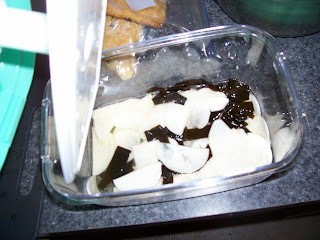 To me the result after around a week tastes a bit like the sea. The smell takes me back to the smell of the ocean far out at sea and the pickles taste like licking your lips after an afternoon swim off the coast with a bit of a radishy crispness. Not bad at all! 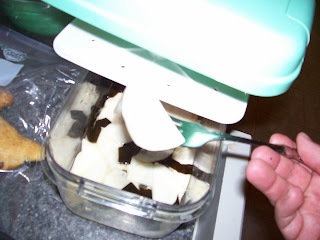 I will definitely be trying this again this spring and summer with various vegetables. I can hardly wait to get some kale into this thing.

In other non-pickle notes.
We went to meet with the folks from Transition Northfield on Saturday morning and found them to interesting people. They sent us away with a book to read and some suggested videos to view. We also heard about a permaculture class that they were sponsoring at the co-op on Monday night.
Sunday I decided to build a cold frame out of some straw bales and old storm windows. This will be the subject of a future post once I can clean it up a bit.
Jess and I decided to stop by the co-op early on Monday and picked up some milk for cheese making and some Sunchokes to see if we liked them before adding them to the list of veggies to grow this year. We attended the lecture and ran into some of the folks from TN again as well. Then we came home and made our very first ricotta cheese with the milk we picked up. We can't wait to make lasagna this year with our own pasta, tomato sauce and ricotta and mozzarella cheeses.
Posted by Frustrated Farmer Rick at 6:11 PM 6 comments: