It has been a while so forgive me if I ramble a bit.
First the weather. Following one of our colder and wetter Winters, we are now starting on a cooler and wetter spring than normal. This has made it a bit tricky to get into the garden but with a bit of diligent help from my darling bride we have managed to get almost half of last years garden expansion planted up.
Next came the rabbits. We had been thinking that rabbits would make a good addition to our homestead for some time. Our friend Jamie had a chance to taste and fall in love with a rabbit terrine at Corner Table. He was very supportive of us getting the rabbit project off the ground so we thought now was the time. We decided on champagne d'argent. We were able to find a local breeder and meet up with them in a gas station parking lot. It was all quite cloak and dagger. We brought them all home and set them up in the garage and they have been doing well. 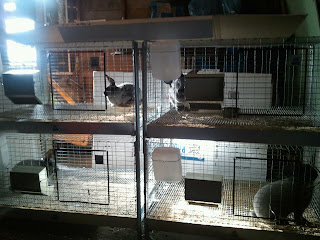 Then we have been looking to get a flock of layers back on the farm. We ordered 15 silver lace wyandottes and 5 araucanas. We received those on Monday and set them up in a brooder in the garage as we have been seeing freezing temps at night. We also got a few indian game roosters for future meat bird breeding stock. 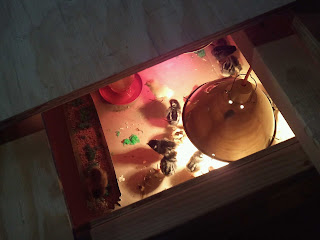 Lastly we also ordered ducks again this year. We decided to try a Rouen ducks. We plan to raise them in the orchard again this year. They also arrived this week. We had to pick them up this morning. We brought them home and placed them in a second brooder in the garage. 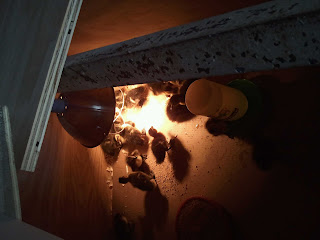 Well that is enough for now. We have also begun composting in a big way. More about that later.