This is just a quick update post. I need to break the streak of not posting to this blog.

The garden is realy going like gang busters. We are getting three or four courgettes every day. We are starting to get sungold tomatoes by the bowl full daily as well. We have harvested almost all our small shallots along with our onions and garlic. We have let our borloto beans go past green bean stage and now plan to harvest them for fresh beans. We lost one of our towers of scarlet runner beans in one of the recent storms. We seem to be having storms every three days this summer. The ducks are doing well. I cleaned out their pond yesterday and refilled it with rainwater captured from the pole barn.
Posted by Frustrated Farmer Rick at 7:57 PM 7 comments:

We have had our first real harvest from our Apricot trees this year. We decided to pick them all off of one of our trees earlier this week as a windstorm was forecast and the fruit was already starting to drop off the tree at the slightest provocation. We kept them in the refrigerator for the week and they have held up well. We needed the time because we wanted to preserve them but were already sitting pretty from last years jelly and jam. So we poled a few experts and they suggested chutney. 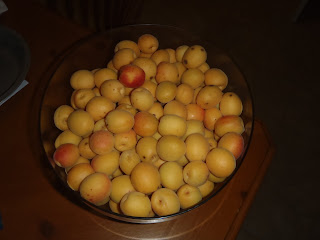 We have seen chutney made on a few cooking shows and have loved the store bought chutneys we have had a few times. This was still our first batch and I was a little nervous about getting it right. As we planned on canning the batch it was important to get the acid right. From my internet perusing it looked like around two cups of acid to about 2-3 lbs of fruit was the right ratio for preservation. 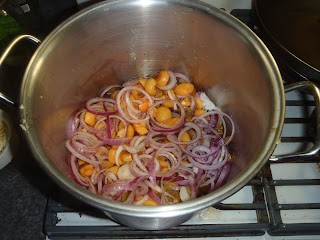 The fruit was made up of six cups of chopped apricots and four red onions from the garden along with a cup of golden raisins and some grated ginger . We used cider vinegar and a bit of orange juice for the acid. The recipe also called for one pound of brown sugar and four tablespoons of salt. I trimmed the salt and sugar just a bit. As for spices we added hot pepper, black pepper, mustard seed, cardamom and cumin to a spice bag and cooked up the lot. From there we cooked the chutney down to a good consistency and canned it. I won't say much about the canning part as I am still learning to get it right. So far so good, but I would rather you looked up the proper method in a reliable source like the Bell "blue book". 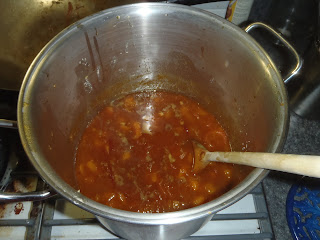 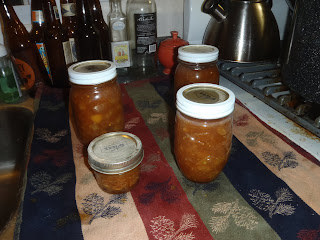 There was more than this but I took the picture while the first batch was cooling on another towel.

I tasted a bit of the chutney and it turned out great. Hot and spicy but with the sweet tang of the acid and sugar. I can't wait to try some after it has had a chance to come together a bit as chutneys are supposed to get better with age.
Posted by Frustrated Farmer Rick at 8:46 PM 8 comments:

We harvested our first zucchini yesterday night. It was actually two of the round variety. We decided to grill them out as we were already roasting a pan of beets, turnips and garlic with thyme and sage. We decided to grill as it was too hot in the house to use the oven. The squash was great and the mixed roast was quite good as well. We also had our usual dinner salad as well. We topped the salad with some smoked lake trout we picked up on the way home from our weekend up north. 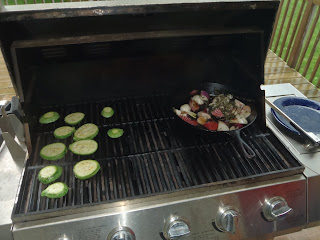 I also wanted to put up a picture of the new runner bean trellis. I got this up a bit late but runner beans have never disappointed me when it comes to rapid growth. 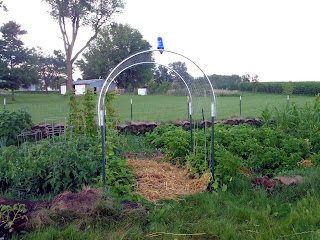 Sometimes it is just so good to be home. 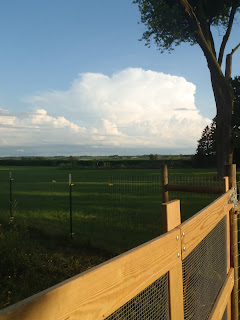 I was going out to the orchard to check on the ducks this morning and noticed how deep green the grass inside the orchard was in comparison to the grass outside the fence. It was my hope that by housing the ducks in the orchard we would be restoring the soil. The soil in this area is incredibly thin and clayish. I think it is actually subsoil that was left behind by excessive turning of the soil in that area. We hadn't realy dug into the soil before having the orchard planted and if we had we probably wouldn't have put the orchard where we did. So now we are stuck with improving the soil around the trees. Last fall I planted clover around the trees and I am sure it has helped as well. 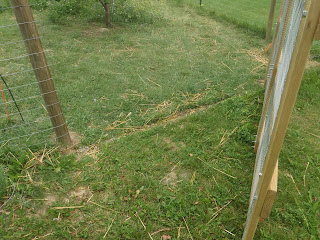 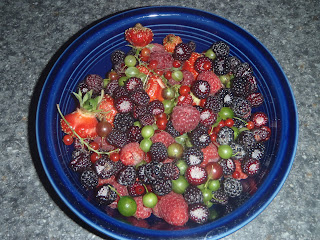 We didn't want to let them go to wast but we still have a fair supply of jam from last year so we made them into a galet. It turned out pretty good. I hope to make more out of our raspberries this fall. 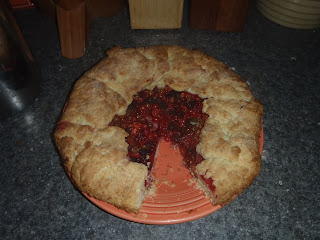 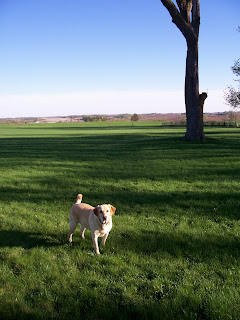 I came in tonight to set out my thoughts about the passing of our beloved farm dog Cooper and found that my lovely wife had already written the most perfect post. She posted over at Lefse and Kimchee. So I will settle for a bunch of pictures instead. 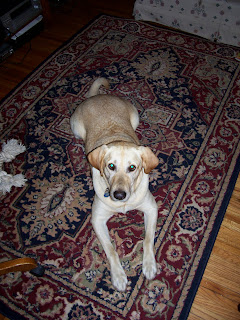 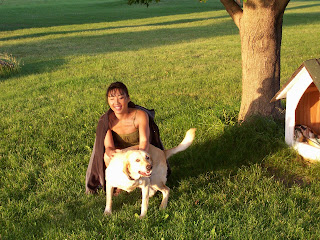 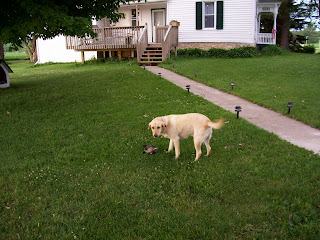 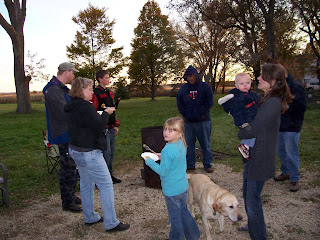 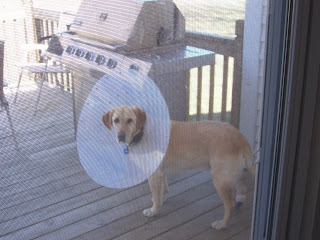 I hope to someday be as good a man as he thought I was.
Posted by Frustrated Farmer Rick at 7:33 PM 8 comments: