I know it sounds like the name of an uninspiring punk band or possibly a late night cable film but "cheap meat" is something even more disgusting. It is a plague upon our times.
Taking the recent news of downer cows being made into meat and sold to the schools in the US as an example. We as a people have been increasingly unlikely to ask the questions that need to be asked. Like where did this meat come from? Who processed it? Who prepared it? I mean how in this day and age is it even possible to raise, slaughter, transport, prepare, wrap and sell anything made of meat for less than a dollar? Think about it for a minute, by paying low prices for one of life's most precious foods we are saying we don't care about it. Think about the guys killing cattle for close to minimum wage. We tip a bartender for pouring a drink but balk at paying the guy responsible for nourishing our bodies a decent wage. For that matter what about the man or woman that cooked your meal? Shouldn't we be paying them better as well? I mean if the slaughterman is the first line of quality control then they are surely it's last possible check against disaster.
I don't have anything against eating meat. In fact I am a rabid devote of the wonderful stuff. It is precisely because I love meat so much that I am urging you all to buy meat that is worthy of eating. Don't tell me how great it is that you got a giant package of meat for only two bucks down at the Wallymart. You should be telling me about the fine steak you had last week and how it was worth every penny. Something to consider next time you step out for a Whitey One Bite.

Eat your vegetables and expensive meat,
Rick
Posted by Frustrated Farmer Rick at 6:03 PM No comments:

Well not too much in the way of farm stuff to report. I cleaned out the chicken coop this morning. I a placed a few concrete blocks in the coop to support there waterer. It raises up the water above the litter and keeps it level to minimize spillage.
In food news it was a good weekend. I made dried cherry scones for breakfast using Alton Brown's recipe. They weren't my best batch but they were still good. We also made some venison loins in a rhubarb wine sauce. The sauce was entirely something I made up at the stove but the garlic and butter and rhubarb wine flavors really did something with the venison. Jess also made popovers as well and the were great as well.

Well that is about it for now.
Rick
Posted by Frustrated Farmer Rick at 5:41 PM No comments: 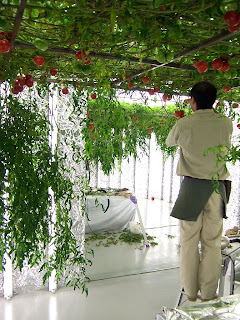 In my blog perusing I came a crossed something I had seen before but felt I should share. Pasona O2 is a cool Japanese indoor garden/farming project. From what I can gather it is part art project, part labor training program and all funky.
Links;
Treehugger post.
Direct link. (for those that read Japanese)
Pruned post
Flickr search

Image borrowed from Flickr user dimitridf please check out his work.
Posted by Frustrated Farmer Rick at 7:44 AM No comments:

Sorry I haven't written in a while. Winter leaves me without a lot to say. I mostly putter around. I have been setting up a work space in the library. I have been more interested in electronics lately. I have been scraping out electronics in the basement when the spirit moves me. I have also been out to the forge a few times but have yet to make anything. I have also been trying to grow barley grass in the basement. I plan to give it to the chickens as a treat once I get it started.
I have also been researching a few things. I have really been interested in alternate power generation as of late. I think this spring I will try and make some form of small wind generator. I am only planning on charging a few NiCad batteries at first but maybe it will be the start of something good.
I tell you if I had had a wind generator this weekend I would be sitting pretty. We had sustained 20-30MPH winds here from Saturday to Sunday.

Well Jess and I went to our first caucus this evening after work. I have to admit that I was a little nervous going in. In truth it was a great experience, I got to meet a number of like minded neighbors and share views and ideas with them. I was surprised to see the number of people that were Democrats from my little township.
I also found out about another candidate for democratic party endorsement in the upcoming senate race. Jack Nelson-Pallmeyer. I was surprised that I hadn't heard of him before. I listened to a bit of the NPR Minnesota Debate and I liked what I heard from him. I am not sure yet that I am ready to endorse him outright but I did find him to be a viable candidate and plan to find out more about him.
Posted by Frustrated Farmer Rick at 8:11 PM 2 comments:

Yesterday I started another 2 loaves of no-knead bread. I made one loaf with tomato and rosemary and the other was plain. I baked them up this morning. Jess and I had some with eggs and bacon for breakfast-brunch. I then saw a post over on Gardenfork.tv about baked eggs. Well I figured that they might be a good thing to put on top of some toasted rosemary bread. Jess and I made a few ramekins of eggs for dinner as well. We added cheese, turkey and heirloom tomato to the eggs as well. They were great. I think we will certainly make them again.
On another note Ben asked after one post if I'd had any trouble with the Kitchen Aid pasta maker. I can now say that I have. We made spaghetti for dinner last night again. I tried to mix the pasta in the bowl with the machine instead of kneading it by hand. The pasta dough didn't want to come together so I added more water and oil till it did. It made a nice looking dough quickly after that. But the dough ended up too wet and resisted passing through the plate and the dough that did stuck together. I had just about given up when my awesome wife stepped in and proceeded to kneed much more flour into the dough. The resulting dough seemed to dry but it made a much better pasta. We ended up eating the pasta with more kale with garlic.
Delicious.

Rick
Posted by Frustrated Farmer Rick at 8:55 PM No comments: