It has been that kind of Spring

We are so far behind this Summer. Crap! Is it Summer already? I have not been posting as much as before and here is why.

We have had a very cold and wet Spring. It was colder than our average except of course for the few days it didn't rain but instead went to 100F with 20 MPH winds. I guess it is better than hail.

Also this Spring I took a long planned trip to th boundary waters on the Minnesota Canada border.I had a great time and can not wait to go again next year but it also pushed back planting a week. I did catch my first lake trout, one more MN species off the lifetime fish catch list.

Then our new senior doe rabbit appeared to be gaining weight. Turns out she was just being too well fed. This combined with a previous failed breeding by the folks we got her from means she is probably too old to conceive That sets us back on this plan as well as our junior doe will not be old enough to be mated until September.

Also earlier this spring an old ash tree decided it would be much more comfortable laying down. Unfortunately for us it decided to lay down on the house. There was a fair amount of damage to the old summer kitchen and we are now getting bids to make the necessary repairs and dealing with the insurance company. So far they have been unlike a good neighbor and not so there.
We are also moving the ducks and chickens along. They have booth been moved to their permanent housing and are being introduced to the pasture today. Which mean I need to quit messing around here and get out there. 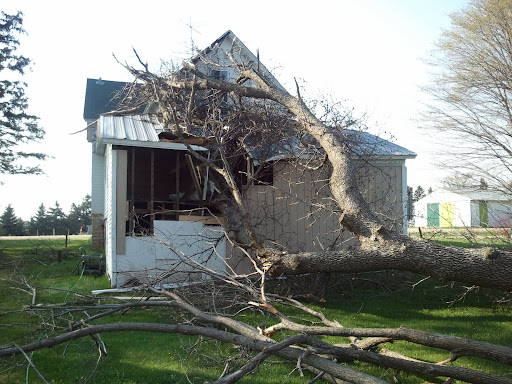 FF Rick.
Posted by Frustrated Farmer Rick at 7:42 AM 4 comments: