Ducks in the orchard!

No it is not a code phrase. we really have ducks in our orchard now. We had fenced in the orchard a while back but the orchard was in need of a gate, pond and electric wire.
Well first I built a gate for the orchard. 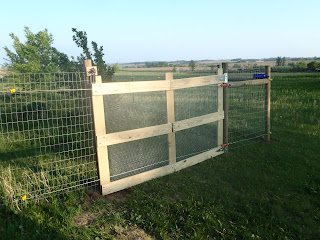 I know that the gate is a bit bent but it is kind of tricky to make an eight foot gate out of five foot or less lengths of board. But I am proud of how it turned out just the same. 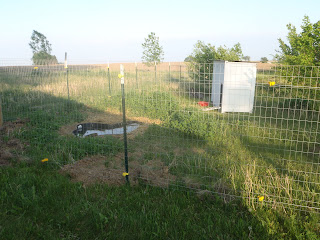 Then I finished digging in the pond liner. It doesn't look like much but it is quite deep and contains 160 gallons of water. I plan to catch the run off from the pole barn and direct it into the pond to help keep the water fresh. 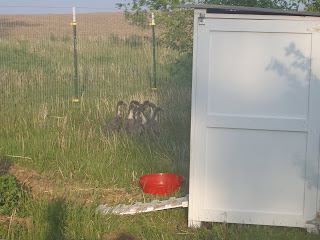 And last but not least the fence was strung and electrified and the ducks were rolled in. They stayed in their mobile home most of the first day but have now taken to wandering the yard as a herd.
Posted by Frustrated Farmer Rick at 5:00 PM 4 comments:

Last Sunday we had the chance to head back down to the farm for the actual Where the Wild things are dinner at the farm. Jess and I got there early and helped wash and sort greens again. We sorted greens until the first farm tour took place. I snuck away to hear Ralph talk about his system for raising his cattle. I didn't get the chance to hear him talk about the cattle last year and realy wanted to hear it this year. Ralph took us around his pastures and explained the way he rotates his cattle through them to maximize his return from the land while at the same time minimizing his negative impact on it. One point he mentioned was that with cattle he locates the bale feeders in the areas of the field that are most in need of fertilization and the cows take care of it while feeding. 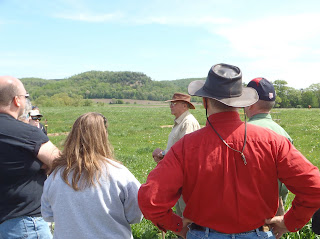 Ralph took the crowd out to meet the herd. It was interesting to see the cows up close. I was surprised to see how few flies his herd had. I didn't get the chance to talk to him about pest control. Maybe I will ask him next year. 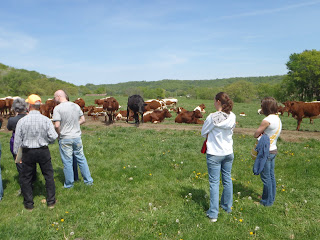 After the tour I went back to help out with the greens again. I had Jess take a break and get some of the wonderful cheese and wine that were available. Soon it was time for the main event.
It was great to see Scott and his staff preparing the meat on the open wood fired grill. It was even better to eat it. There was so much on offer and it was great to see the nettles and greens we had worked so hard to gather in turned into wonderful dishes. 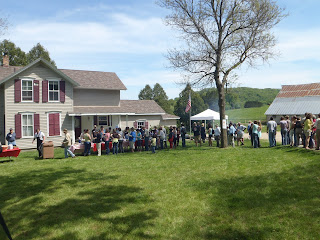 After dinner there was a few talks and the opportunity to meet tons of great people. We stayed until everyone left and helped to put away the benches and pick things up.

There were some nettles left over so we asked if we could take some home. We had a few recipes we wanted to try and didn't want to see the nettles go to waste. The first recipe was to make a nettle pasta. The first step in that recipe is to briefly boil the nettle tops and then shock them in ice water. 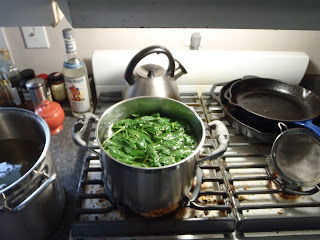 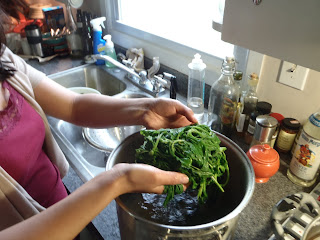 After that the moisture is wrung out of the nettles and they are blended in the food processor untill they make a smooth puree. 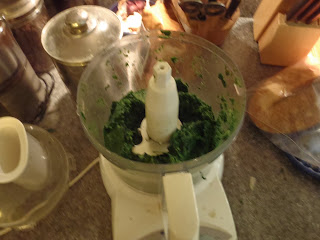 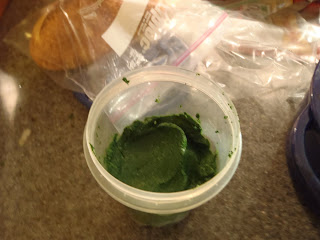 The next step will be to mix the paste into the pasta dough and then roll it out to sheets. In one of his shows Hugh Fearnley Whittingstall made a dish with these and a squirrel ragu. Since we didn't plan to make pasta that night the pure went into the freezer until the next time we want to make pasta.

The next recipe is also from River Cottage. It was for a nettle beer. The first step was to pour boiling water over the nettle tops and let them gradually cool for an hour. 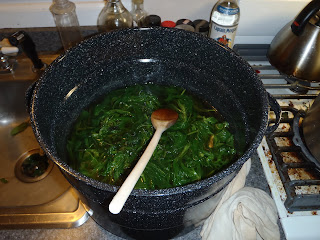 Then the nettles were removed and some orange and lemon juices were added. Also the sugar was added and then the brew was left to cool to below 100F so that the yeast could be added. 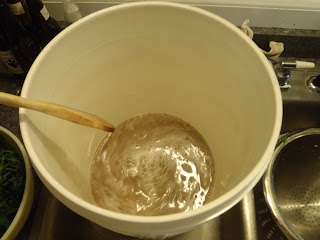 Finally the whole thing was set aside to ferment someplace warm. It started to bubble almost immediately so I have high hopes for this batch. 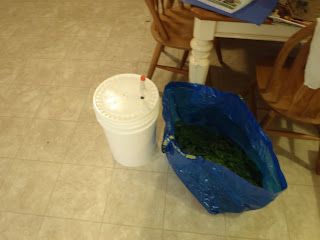 Well that brings us up to last Sunday night. I will write tomorrow to bring you all up to speed on the new duck house
Posted by Frustrated Farmer Rick at 7:53 PM 2 comments:

Where the wild foods are Pt. 1

Today Jess and I joined Slow Food Minnesota for a day of foraging in preparation for the third annual Where the Wild Things are Spring Feast. We spent the first part of the day foraging around some of the pasture for chickweed, lambs quarters and nettles. After returning for weigh in at the farm house it was determined that we still needed more nettles so Ralph led us to a corner of his property that had fields of nettles and we set out to pick as many as we could. It was just Jess a guy named Kelly and myself. We were told we needed to just pick the very tops and that we needed 50 lbs of them. As we were picking and getting stung I had time to think. At around a gram apiece we were going to have to pick just a pit over twenty two thousand nettle tops. I am not sure if we got them all but we put in a heck of an effort. 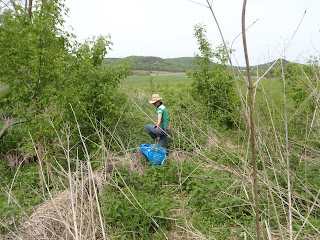 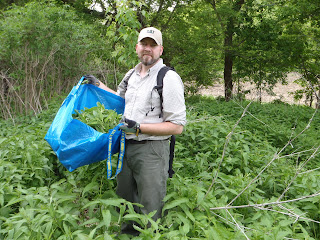 When we got back the farm house everyone was already busy washing and sorting all the salad greens that we had gathered earlier in the day. The three nettle pickers took a second to weigh our haul from this trip and it came to just under twenty five pounds (eleven thousand nettle tops)! Then we started to settle in to the task of washing, drying and sorting the greens for the salad tomorrow. We spent the rest of the evening picking over salad greens and drinking the occasional beer and chatting about all things sustainable and slow. We had an excellent dinner and wrapped up the greens cleaning. While another crew cleaned the amazing pile of ramps they had managed to find.
Seriously that is one mondo pile of ramps! 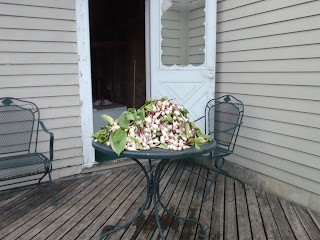 We brought our the ducks and chickens the stems from the chickeweed we sorted and now if you will excuse me I am going to go pass out and dream of nettles.
Posted by Frustrated Farmer Rick at 7:59 PM 5 comments:

The ducks have been growing so fast that we had to do something to get them more room but the duck house is not set up for heating. We decided to construct a temporary pen in the garage and hope that the ducks stop growing so fast. We were also concerned that they were not getting the exercise that they needed to strengthen their muscles to support them.
We constructed the below pen out of some two by fours and some plastic fencing we had from a prior chicken pen. The ducks seem happy with it. 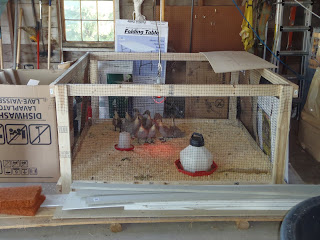 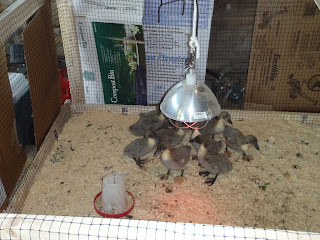 We also had a freeze Saturday night. We had plenty of warning of it so we covered the garden and moved our burn barrel and our portable fire pit into the orchard. We started a big fire in the burn barrel and loaded it down with wood at dusk. I let it burn a bit and then choked down the exhaust so it would smolder all night. We also piled up dry wood in the fire pit. I went out at midnight and started the fire pit as it was getting close to freezing out and added more wood to the barrel. It wasn't immediately clear if it worked this morning but we have our fingers crossed.

Now I am watching the news and having a nice rhubarb daiquiri.
Posted by Frustrated Farmer Rick at 8:11 PM 2 comments:

Well the ducks are growing like mad. At only a week and a half old they appear to have doubled in size. They have been eating and drinking like crazy. It has been fun to watch them so far and they really appear to be thriving in their current housing but at the rate they are growing they will need a new house and soon! 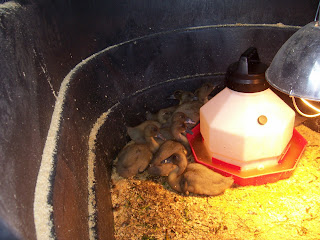 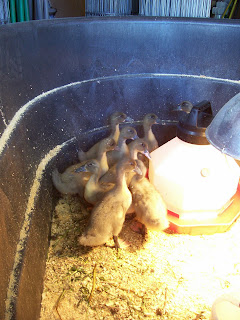 I have gotten thier new home nearly finished. One of the crates I got from work a while back is in the process of being converted to duck housing. I still need to add the roofing and paint it but otherwise it is complete. The next three pictures are of the pen that some friends came down and helped build this weekend. My friend B & J came down on Saturday and helped set the posts and plan the enclosure. Then J came back and helped me hang the fence today. The only steps left are to add a gate and run electric wire around near the top and the bottom. 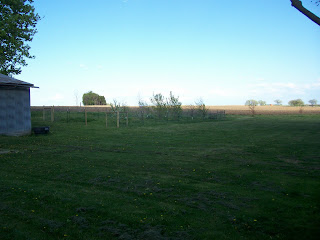 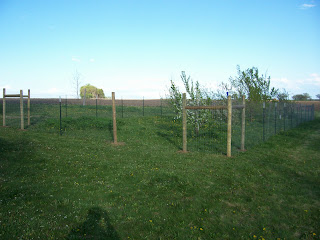 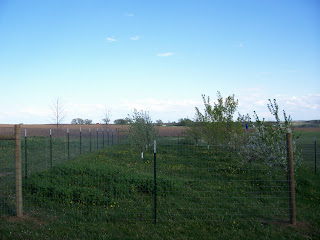 The idea to put the pen around the orchard was something I got from a permaculture video I saw. The idea is that the birds can root around and eat any insects that may be under the trees and fertilize the trees with their droppings. The trees will shade the ducks and provide them with any fallen fruit. So it is win-win.

Speaking of duck droppings. I added this litter to the garden expansion and tilled it all in this evening. 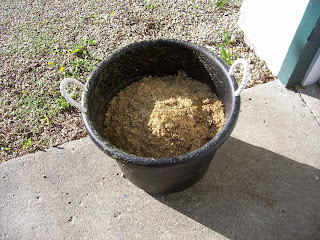 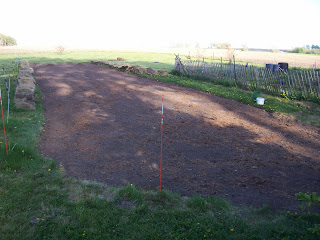